‘Coating is a major and important job at LVG Plants,’ says Geert van Geest. This family business in Krugersdorp, not far from Johannesburg, covers 11 hectares. Fifteen different potted plant species are grown here in film-covered greenhouses. The main groups are Phalaenopsis, potted roses, Anthurium, green plants and bonsai. The product portfolio is extensive: a 2,500 to 3,000m2 section is allocated to each species.
LVG Plants uses Eclipse LD as its shading agent. This Sudlac coating, together with other horticultural supplies, is directly exported from the Netherlands to South Africa by the company’s own export company LVG International. 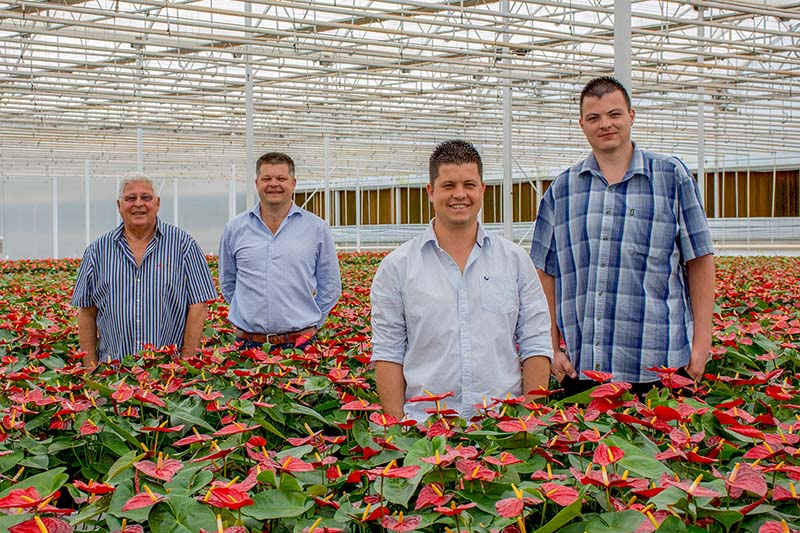 Coating is an essential component of the entire production process at LVG Plants. Depending on the plant species, multiple layers of Eclipse LD are often applied to the greenhouse film during a growing cycle. ‘Less coating is applied to a potted rose section than to a Phalaenopsis section,’ Geert explains. The PAR meters suspended in every section play a key role in deciding whether or not to apply an additional layer. However, the weather predictions and the number of years that the film has covered the greenhouse are also important.

LVG Plants has been using Eclipse LD for two years and Van Geest has learned a great deal during this time. For example, coatings adhere poorly to new plastic. ‘New plastic comes with a thin greasy layer ,’ Van Geest now knows. ‘This causes poor adhesion of the shading agent and it quickly rinses off when it rains.’ Before coating, new film must first be thoroughly cleaned and degreased.

Another piece of advice he offers is the importance to check the type of film to which the chalk layer is to be applied. Van Geest: ‘The further away from the equator, the more the film moves. It expands and shrinks as the temperature changes. Film types that shrink significantly are better treated with multiple thin layers of Eclipse LD instead of a single thick layer. A thick layer is more likely to show cracks and therefore wears off more quickly from the greenhouse cover.’
Van Geest recommends that you discuss the elasticity of the film type with the greenhouse builder. ‘We’ve submitted some samples ourselves on occasion, in order to come up with a solution together. A producer can sometimes alter the composition of a film to reduce the film’s elasticity and as a result the coatings adhere better to the greenhouse cover.’

Although all of the greenhouses at LVG Plants are equipped with screens, a coating on the greenhouse cover is indispensable to optimise growing conditions and to reduce the plants’ stress. ‘UV radiation is high here.
Applying several thin layers of coating is quite the job and is carried out entirely manually: that includes mixing the shading agent in the right proportions, as well as spraying the coating onto the greenhouse cover. ‘Prior to a new growing cycle, we remove the old chalk layers and at the same time we wash off the dust attracted by the static greenhouse film cover.’ Automating this work is a possibility. ‘However, at the same time, we are hesitant about this,’ says Van Geest. ‘Unemployment in South Africa is high. We do not want to automate for just any reason when we can also create jobs for people.’

Explore all our shading paints