‘We are expecting a huge demand for shading products,’ says Mayur Patel of Sabar Agro Seeds.

Sixty per cent of the Indian economy is based on agriculture. And now horticulture is booming: more and more farmers are switching to horticultural products. The typical horticultural regions are Maharastra, Gujarat and Rajasthan. Sabar Agro Seeds, in Gujarat, is the second largest supplier of seeds for covered crops in India and since last year the distributor for Sudlac shading products.

Sabar Agro Seeds has been involved in seed production and trade for 20 years. The company is one of the country’s largest importers of seed and the second largest supplier of seed for covered crops in India. “In the western part of India we sell seed produced by Monsanto and Enza Seeds and we are the exclusive distributor for the Turkish Yuksel Seeds. Yuksel is the second largest brand used in greenhouse cultivation in India. We produce seed ourselves on over 200 ha in different parts of the country, both in the open field as well as in plastic greenhouses. This is produced for India and surrounding countries,” says Mayur Patel. He is sales director / joint owner of the company that was founded by his father Dineshbhai Patel. Mayur Patel is responsible for imports and the marketing of imported products.

Patel sees on a daily basis how more and more farmers are switching to horticultural products such as sweet peppers, cucumbers and tomatoes. At the moment these crops are mainly grown in the open field. “Over the last five years horticulture production in India has exploded. Growers are open to innovative technical developments and the Government stimulates the development of the horticultural sector

through subsidies. I foresee enormous opportunities and growth possibilities for European companies over the next ten to 15 years. Now growers are still producing mainly for the local markets.”

According to Patel, covered cultivation under plastic started just five to six years ago. “So don’t expect any high tech horticulture within the next ten to 15 years; 98 per cent of the greenhouses still don’t have any climate control. But you see change is happening quickly.” 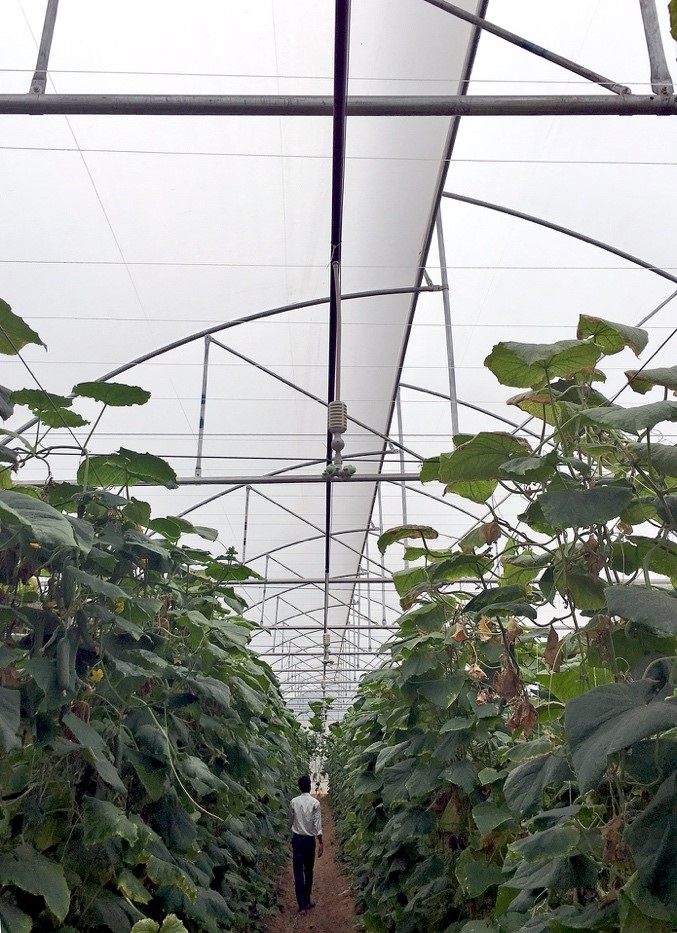 Last year the company became a distributor for Sudlac products. “We came across Sudlac on the Freshplaza website. Last September we invited Ruben Lensing, area export manager for Sudlac, to visit us and he joined us at the Agrifair in Gujarat.”
Lensing also visited one of the distributor’s largest customers. This company has over 3 ha of plastic greenhouses and 16 ha open field for cucumber, sweet pepper and tomato. “The biggest problem for nurseries such as this is that the temperature in July and August can rise to 50ºC in the greenhouse. By applying our shading product Sombrero, growers can flatten out such temperature peaks. This gives them the opportunity to extend the growing season and increase yield. The extra revenue due to the better greenhouse climate easily pays back the cost of Sombrero.”
According to Lensing, Sombrero works very well on plastic. “The advantage of Sombrero compared to powder is that it is easier to apply and in a very homogeneous layer. It is also beneficial in terms of value for money. Compared to removable shading solutions the protective layer slowly wears away over the course of the season so that no cleaning solution is needed to remove the layer. And that makes a difference in costs.”

The seed company ordered a container load of the shading solution Sombrero. “In mid-September 2016 Sabor Agro Seeds started to run trials with Sombrero on local greenhouses. The most professional growers in the region were invited to use the product. It is important to start with these growers because if they are successful others will follow,” explains Lensing.
He also visited the local Centre of Excellence, where thanks to the Gujarat government, subsidised research takes place which aims to improve the quality of greenhouse products. There is a lot of interest in this work. They would also like to run trials with the Sudlac shading products.
Patel says it is too soon to say anything about the results at the different greenhouses as the season is not yet finished. “But if growers in more than 30 countries are satisfied with the Sudlac products, then why not in India?”
He sees large potential for the shading products.” The concept of shading is still new in India, but he expects interest to certainly grow. In any case, both as a grower and a distributor, he is very satisfied. “The service and communication offered by Sudlac are excellent.”